Exhibits at the Tate 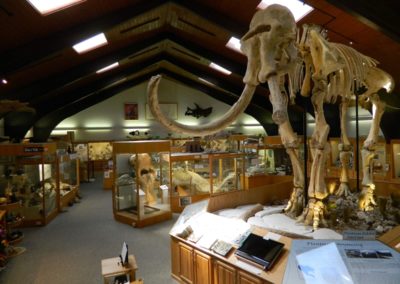 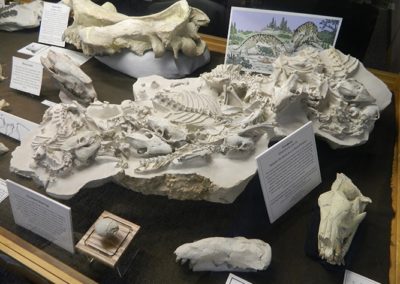 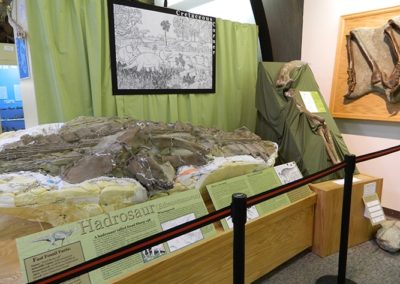 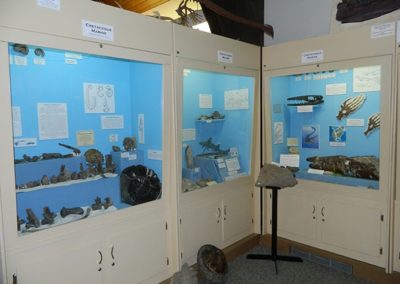 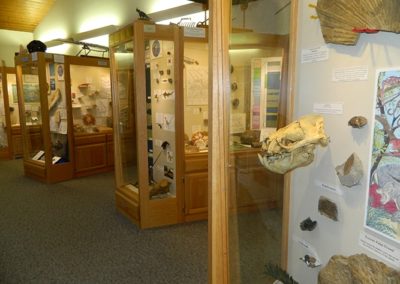 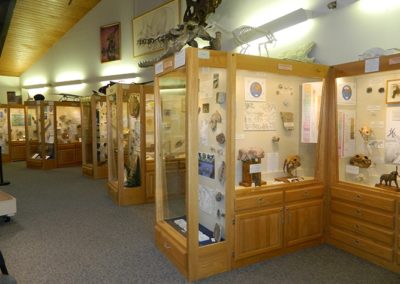 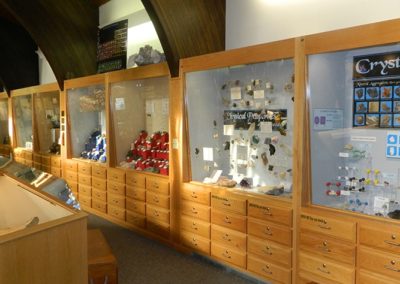 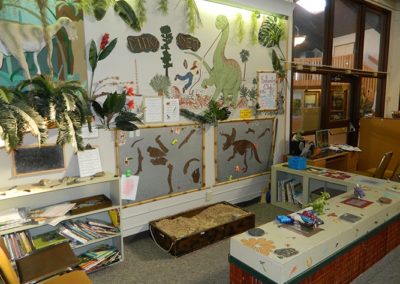 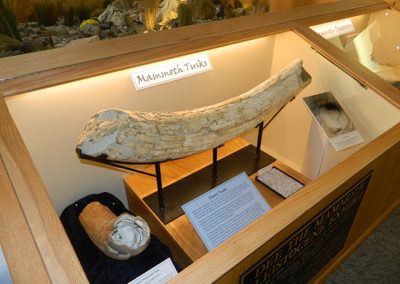 Dee the Mammoth and the Pleistocene Exhibit

Dee the Mammoth is an 11,600 year old Columbian Mammoth who lived in the American West during the Pleistocene, or Ice Age. 65 to 70 years old when he died, Dee is unique in both his advanced age and his completeness.

Dee was discovered in 2006 by a backhoe operator who was preparing an oil well pad site north of Glenrock, WY. The operator, Dee Zimmerscheid, knew that he had hit something big when several large white bones were churned up from under his machine. He called in his site supervisor, Bill Allen and together they decided that it was time to call in the land owners and the experts.

It was determined that the bones were from a mammoth and that more of the huge mammal was probably located below the surface. Dr. Kent Sundell recommended that the oil well be moved over about 100 feet and the oil companies that were involved agreed. Additionally, the Allemand/Byrd family who owned the land and thus the bones, generously donated the skeleton to the Tate Geological Museum.

During three of the next four summers, over 300 mammoth bones were recovered from the site. After recovery, the bones were transported to the museum lab to be cleaned and cataloged. Many of the bones were complete and identifiable, making the staff and volunteer’s jobs in the lab easier. The skeletons completeness enabled the the Black Hills Institute of Geologic Research to reassemble and mount the mammoth for display in the museum where it can be seen today.

The Pleistocene Exhibit, featuring Dee, informs visitors about Wyoming’s Pleistocene environment, introduces a few of Dee’s contemporaries and discusses the differences and similarities between mammoths, mastodons and elephants. Visitors can play the PSI (Pleisto-Scene Investigation) game to determine, on their own, how the mammoth died and follow the Timeline of Discovery for a quick view of the events leading up to and occurring after the skeleton’s discovery. Watch a video on mammoths or look at photos and home videos from the field as you learn about the life and times of Dee the Mammoth.

Often confused with the more common Triceratops, the Torosaurus is easily distinguishable by the large, natural holes that can be seen in the frill.  Torosaurus fossils have been found in various areas of this region, but large, mostly complete skulls such as Nicole are rare. There is a debate surrounding these dinosaurs. Some scientists consider Torosaurus to be an unusually large, old Triceratops, while others argue that there are enough differences to be a different genus. Stop by and see this massive skull and decide for yourself.

The Dino Den is located in the front, northeast corner (opposite the gift shop) as you enter the museum. Created as a dinosaur discovery zone, it gives kids room to play and investigate on their own. The Dino Den features coloring, puzzles, a mineral ID game, fossil rubbings, touchable fossil casts and dinosaur themed toys for all ages. Stop by to play and learn anytime!

The Walk Through Time, located along the back (west) wall of the museum takes visitors back through time from the Holocene hunter and gatherers of North America right back to the formation of the earth. Along the way there are several drawers with touch samples which allow visitors to interact with the fossils as they move back through time. Be sure to look for the plant fossils, the T.rex tooth, and the trilobites along the way.

The Mesozoic Marine exhibit exposes the underwater world that existed here in Wyoming during much of the Triassic, Jurassic and Cretaceous. Wyoming’s warm, tropical seaways were home to a plethora of marine animals and some plants, including ammonites, belemnites, star shaped crinoids, ichthyosaurs, mosasaurs and hybodont sharks. Of particular interest (here at the Tate Museum, anyways) is the Sundance Plesiosaur, Tatenectes laramiensis, named for the founders of the museum Marion and Inez Tate.

It was the time of the dinosaurs. The Mesozoic Era is usually better known by its three periods, the Triassic, the Jurassic and the Cretaceous. The Mesozoic Terrestrial area highlights the massive size of the dinosaurs as well as a few of the features that made some of them terrifying and so fascinating. Stand next to a torvosaur leg, see how big an Apatosaurus foot really was, check out the size of an Allosaurus claw and have a face-off with Stan the T. rex!

The Pterosaur Ptracks exhibit introduces the pterosaurs that called Wyoming home. Jurassic pterosaur footprints have been discovered near Alcova Reservoir and models in the display have been reconstructed (to scale) from these footprints. These footprints also helped to solve the riddle of how pterosaurs walked when they were on the ground. Did they walk on two feet? On all four? Like a dog or a bat? Visit the museum to find out.

The Eocene Epoch had a warmer, wetter environment and large variety of animals flourished. The landscape was full of archaic mammals that were vastly different from mammals today. Conversely, the reptiles were amazingly similar to their modern counterparts. The Eocene display features a fossilized crab, turtles, fish, mammals, birds and feathers, crocodiles and alligators and plant pieces many of which were found in Wyoming. Learn about life after the dinosaurs, and find out for yourself how similar the Eocene reptiles were to modern reptiles.

The Oligocene Epoch came after the Eocene. By this time dinosaurs had been extinct for about 30 million years, and mammals ruled the earth. The variety of fauna that lived during this time is well preserved in the White River Formation of Wyoming which is known for its preservation of mammals including oreodonts, titanotheres and predators such as the entelodont. See if you can find the skeleton of the three-toed horse and discover how different it is from the modern horse. How many differences can you find?

The prep lab is where the specimens are cleaned and made ready for exhibit in the museum gallery. Our prep lab is visible to the public via a sliding glass window, so you can see what we are working on. Feel free to ask our staff and volunteers questions about the current projects that they are working on in the lab.

Want to see a real T. rex? Ask at the front desk for a tour of our new Rex Annex. The annex was dedicated in May 2017 to house the articulated skeleton of Lee Rex.  Lee is in an 18 x 8.5 foot concretion and was diligently worked on for three years by a dedicated group of volunteers.  It is the first T. rex found in Wyoming to stay in the state.