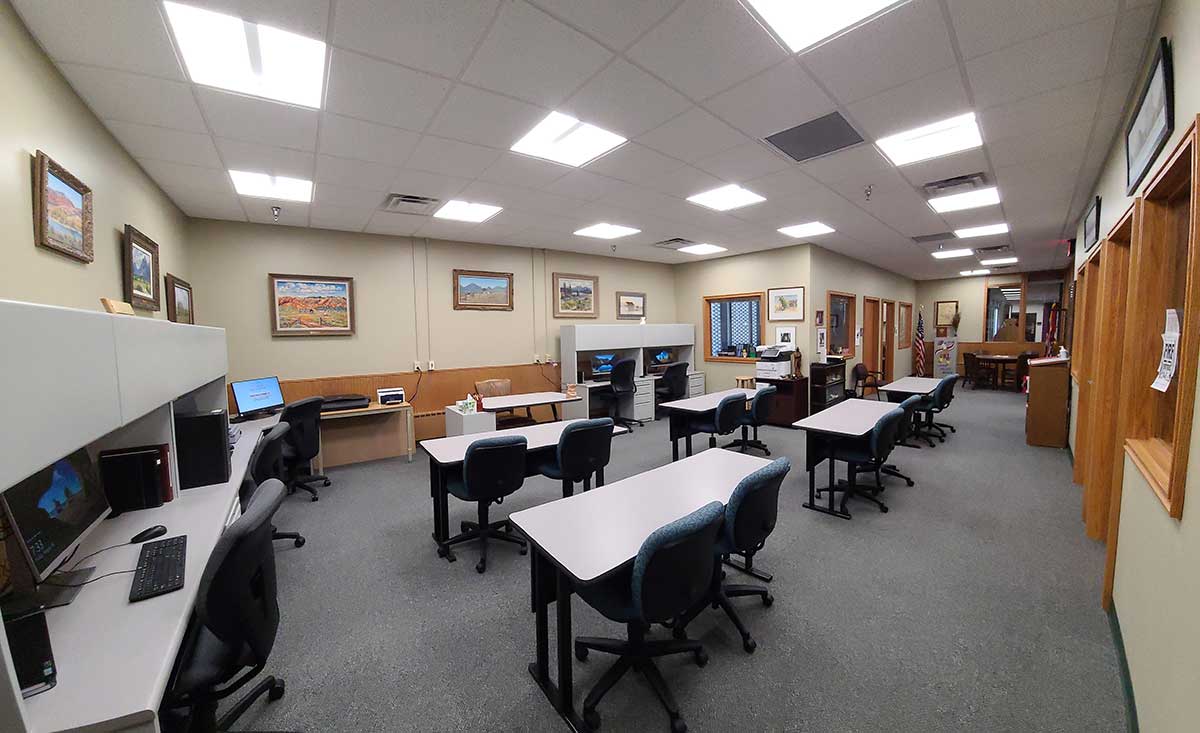 Comprised of archives and special collections, materials support the instructional, institutional and individual needs of students, faculty, staff and external users near and far. The repository is in the process of being organized and described according to two separate but interrelated archival units:

Online finding aids are published on ArchivesSpace. Please use our Research Request Form to help us identify material you are looking for. Though you may hear back from us sooner, please allow 2-3 days for a response.

Be sure to check out the Western History Center’s Digital Repository. This digital repository contains archives and records of Casper College as well as digital collections related to its special collections.

Collect, maintain and make accessible representative and unique sources of information about Casper College and Natrona County that support the academic mission and success of students, faculty, and staff as well as further the institution’s connection to the people of Natrona County and beyond.

Activities supported by Archives and Special Collections include but are not limited to:

Featured from the Casper College Archives:

A  searchable digital collection of the Casper College Student Newspaper.

This collection contains Dale Stiles’ awards, correspondence, and material related to Casper College Rodeo and the National Intercollegiate Rodeo. Researchers will also find scanned newspaper clippings, and photographs. Stiles was an Agriculture instructor and Rodeo Coach at Casper College. He hosted the College’s first rodeo team, which was the first rodeo team to be fielded by a junior college. During his career, Stiles coached Joe Alexander and Dave Brock among others.

This record group contains addresses, circulars, and newsletters issued by the Railroad Commission and its Presidents. Researchers will also find documentation of investigations, of claims paid and appealed, as well as seniority lists for enginemen and trainmen. There are gaps in this record group.

The Frances Seely Webb Collection contains over 1,400 photographs, correspondence, handwritten research notes, the proof copy of Webb’s book, Casper’s First Homes, and a series of scrapbooks. Materials document Casper and Natrona County buildings, cultural institutions, homes, and society from 1890-1978. Webb was a Society and Women’s editor for the Casper Star Tribune.  In addition to the above are items originally collected by Boney Earnest, a frontiersman and former member of the Natrona County Historical Society.

This collection contains Louie Strohecker’s letters home during WWII, including letters from when Louie was a German prisoner of war. A donation of film negatives are documented as being accessioned along with Louie’s letters, but their current location is unknown. The following note was taken from the Casper College Foundation’s Donor Stories webpage: “Louie was a WWII veteran who was captured by the Germans and was later liberated. After the war, he came to Wyoming and was one of Casper Country Club’s first caretakers. He saved enough money to buy some land and became a successful rancher west of Casper. His ranch is still in operation and owned by his heirs.”

This collection contains material on the Michie Family. In particular, researchers will find information on John Fremont Michie, his parents, Tera Crum Michie and other family members. There are two addresses in this collection. One from John Fremont Michie on the dedication of the Fair Grounds Building and one on Casper vs. Casper, given at a meeting of the State Chapter of the Daughters of the American Revolution. There are also multiple autobiographies and related material.

This collection contains a profile of Weather  Service Office Station #74 in Casper, WY. This profile includes a written history of the Station, which opened in December 1939, as well as numerous photographs of the Station and its staff. In addition to the Station Profile, researchers will find annual records, meteorological summaries, weather surface observations, and climatological data.

Fall and Spring Semester Hours: Monday through Thursday 11:00 AM until 4:00 PM or by appointment.

If you have a information need the Western History Center can help with and would like to schedule an in-person or remote appointment, please email wyoref@caspercollege.edu.

Though you may hear back from us sooner, please allow 2-3 days for a response.