Burkett steps down from coaching to teach full time

After 10 plus years as the head livestock judging coach for the Casper College Livestock Judging team, Jeremy Burkett will leave as head judging coach and move into full-time teaching. Burkett will, however, continue with the freshman team he has been coaching and working with but step aside after they finish as sophomore judgers in spring 2023.

Burkett came to Casper College April 1, 2009, to begin his first full-time job as an agriculture instructor and head livestock judging coach. Over the years, Burkett has created a winning team while helping young adults learn and mature into productive members of society.

“My goals when I started at the college were to make the judging team into a very competitive and nationally-known team, bring in good students, offer them a strong academic career focus, and build a very strong alumni base,” said Burkett. 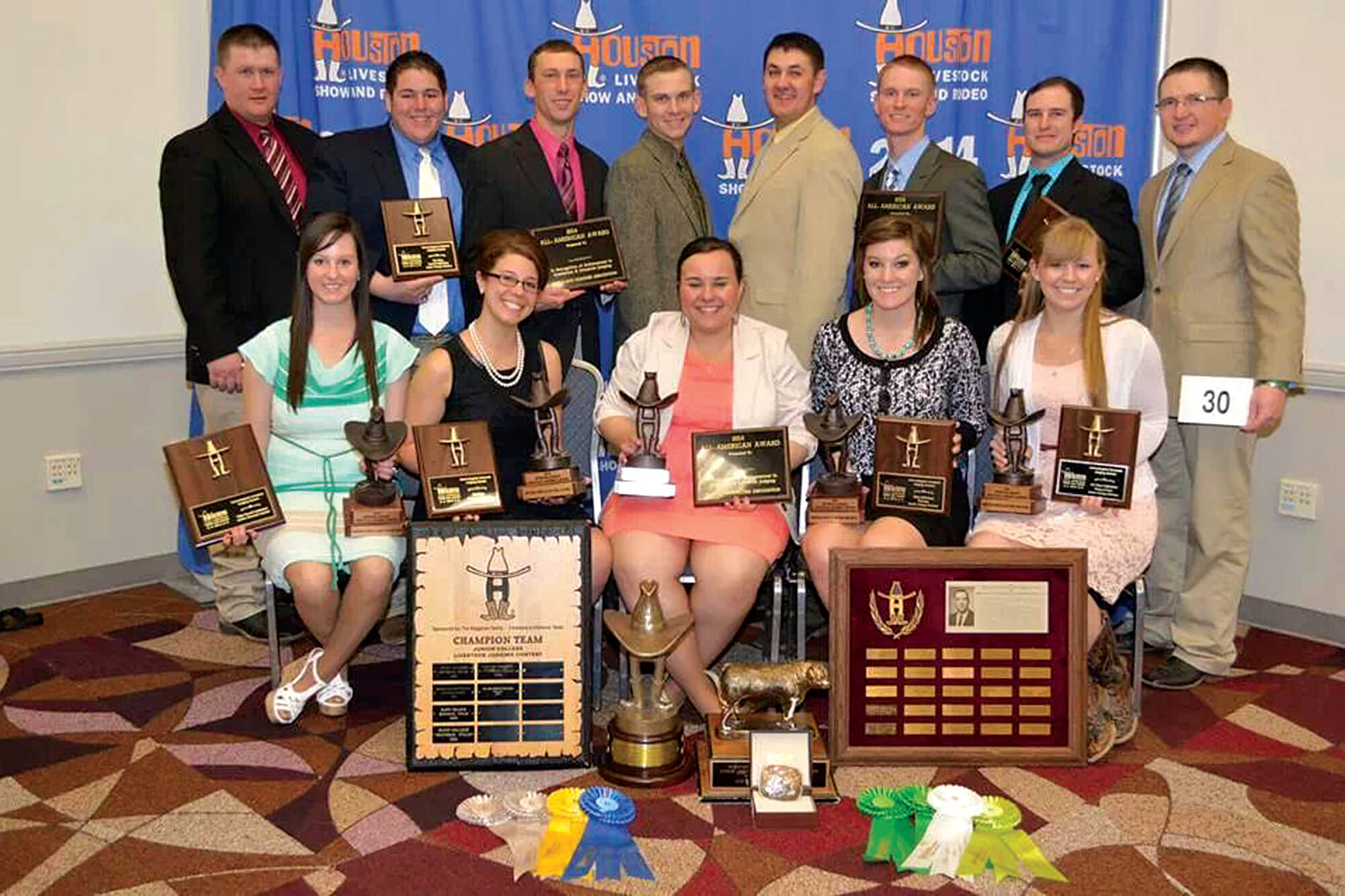 The Casper College Livestock Judging team with their awards when they won the Houston Livestock Show Championship in 2014.       (Courtesy photo)

Each year the Casper College Livestock Judging team competes in a variety of contests, including the American Royal in Kansas City, Missouri; the North American International Livestock Exposition in Louisville, Kentucky; the National Western Stock Show in Denver; the Houston Livestock Show and Rodeo in Houston; the Fort Worth Livestock Show and Rodeo in Fort Worth, Texas; the San Antonio Livestock Show; the Arizona National in Phoenix; the Aksarben Stock Show in Grand Island, Nebraska; and the National Barrow Show in Austin, Minnesota. The team has placed in the top five several times in past years.

During his time as head coach, Burkett had not only winning teams, taking the Houston Livestock Show Championship in 2014, for example, but also teams whose members won in the classroom. Testament to this is the fact that Burkett has had five judgers at Casper College named as academic All-Americans. To be eligible for the prestigious award, the student had to maintain a 3.5 or higher GPA and have placed in the top 10 at three of the four national contests.

Katie Dodge was one of Burkett’s academic All-Americans. “Dr. Burkett always said, ‘Trust yourself, trust your team, trust your coach.’ It’s one of the rules we were given on the first day of livestock judging practice,” said Dodge. “It is never hard to trust a coach like Dr. Burkett. He is an incredible man. To be successful, you have to have integrity, intelligence, and th willingness to work harder than anyone else consistently. He is a living example of all of those things. It’s been nearly a decade since I made the decision to judge for Dr. Burkett at Casper College; it is still among the best decisions I’ve ever made,” Dodge said.

“I consider my time with Dr. Burkett, both in the classroom and on the road in a judging van, as the time that has shaped my education and career path,” said Luke Fuerniss, another academic All-American. “Dr. Burkett’s discussion of livestock composition and its industry application kindled my passion for studying and managing market livestock growth,” he said. “Even as I continue to work on my Ph.D., Dr. Burkett’s teaching still guides my thoughts. While I’ll always remember Dr. Burkett’s competitive drive as a coach that pushed me to maximize my potential, perhaps his most lasting impact on my life was as a teacher. His unique ability to teach the science behind livestock production is truly what stimulated my desire to pursue education beyond Casper College. I’m extremely grateful for Dr. Burkett and his roles in the ag department: for me, he has been a career-shaping teacher and an extremely valuable mentor,” Fuerniss noted.

There is no doubt that Burkett has a knack for recruiting talented students. “A big part of my recruitment is to go to national shows where high school judgers are judging and showing competitively. A large part of it is word-of-mouth and how we find all those kids. But, making a phone call on a personal connection goes a long way,” he said. “Jeremy has been able to draw many talented students to Casper College to judge under his experienced guidance. It has been a win-win for both the college and the recruits,” added Heath Hornecker, agriculture instructor and department chair.

Burkett also created the Casper College Livestock Judging Camp a decade ago. “There were no camps nearby, and I had gained experience running livestock judging camps as the assistant livestock judging coach while a graduate student at Iowa State University,” he said. “Jeremy has a very successful and popular camp that attracts over 100 participants from around the country each year, thanks to his hard work and dedication,” noted Jerry Hawkes, dean of the Casper College School of Science.

The camp allows students to learn from Burkett and serves as a great recruitment tool for the college’s agriculture department. “The judging camp brings in students from all over, and once they can spend time learning from both Jeremy and our current livestock judging team members, many end up coming to Casper College for their college education,” said Hornecker.

Looking back over the years, Burkett said that his biggest draw to coming to work each day was “ … getting to work with those kids every year. The part that I will probably miss the most is getting to see the kids and the growth and development of them coming in as freshmen and leaving as sophomores,” Burkett said. “It’s bittersweet to see them go, but I know they are moving on to big things and will accomplish big things,” he added.

During his 12 years of coaching, Burkett learned that he needed to understand different backgrounds. “Not everyone has the same background from a livestock perspective when they first come here to judge. But everyone has talent and capabilities that sometimes just take a little bit of pushing to get there, discovering their talents, helping them find their passion for what they’re doing. Sometimes it wasn’t necessarily in the judging arena, just giving them a direction to education and their goals.”

On the personal side

Burkett grew up on a ranch near Hillsdale, Wyoming, and graduated from Burns High School in 1999. He was a state National FFA Organization officer and state president from 1999 to 2000. He was recruited to judge on the Casper College team by then head livestock judging coach Kelly Burch.

Burkett flourished at Casper College, where he graduated in 2001 with his associate in agriculture. After his highly successful career at Casper, Burkett went to Colorado State University, where he was a member of the reserve national champion judging team at CSU.

His next stop was Iowa State University, where he earned both a master’s and a doctor’s in animal science. While a graduate student at Iowa State, Burkett helped coach the school’s livestock judging team.

According to Burkett, he came straight from Iowa State and back to the Casper College Agriculture Department. It was a homecoming of sorts as Burkett returned to the first college he had attended to now teach and pass on his knowledge to the new students. “Casper College is my alma mater. The school was a big part of my life and set the trajectory for my education and professional career. It was a no-brainer to come back,” Burkett said.

Watching his children grow up made it harder and harder for him to take the time to be out on the road with the judging team. “The traveling and being away is what really caught up to me as my kids are old enough now and are competing,” he said.

Burkett, along with his wife Karen, has three boys: Garrett, 15; Gage, 13; and Grayden, 8. The boys show livestock themselves, and Burkett would like to go with them to the contests as well as attend the sports competitions that they compete in.

Burkett and his family are also busy with their own company, Triple G Livestock. They raise competitive market lambs for 4-H and FFA kids to show competitively at the state and even national level. The boys are invested in the operation as the company is named after them. “The company was started in 2014, and the boys have duties and responsibilities with the company that they are expected to fulfill,” Burkett said.

“I’m looking forward to my continued professional career here at Casper College. Change is always good. I will still be very involved with the college and serve as the judging coordinator for the coming year, but now be in the classroom full time,” Burkett said. “My intention is not to leave here; just transition into a different role and utilize my Ph.D. in the classroom, which at a junior college will be a big benefit for the students academically,” he said.