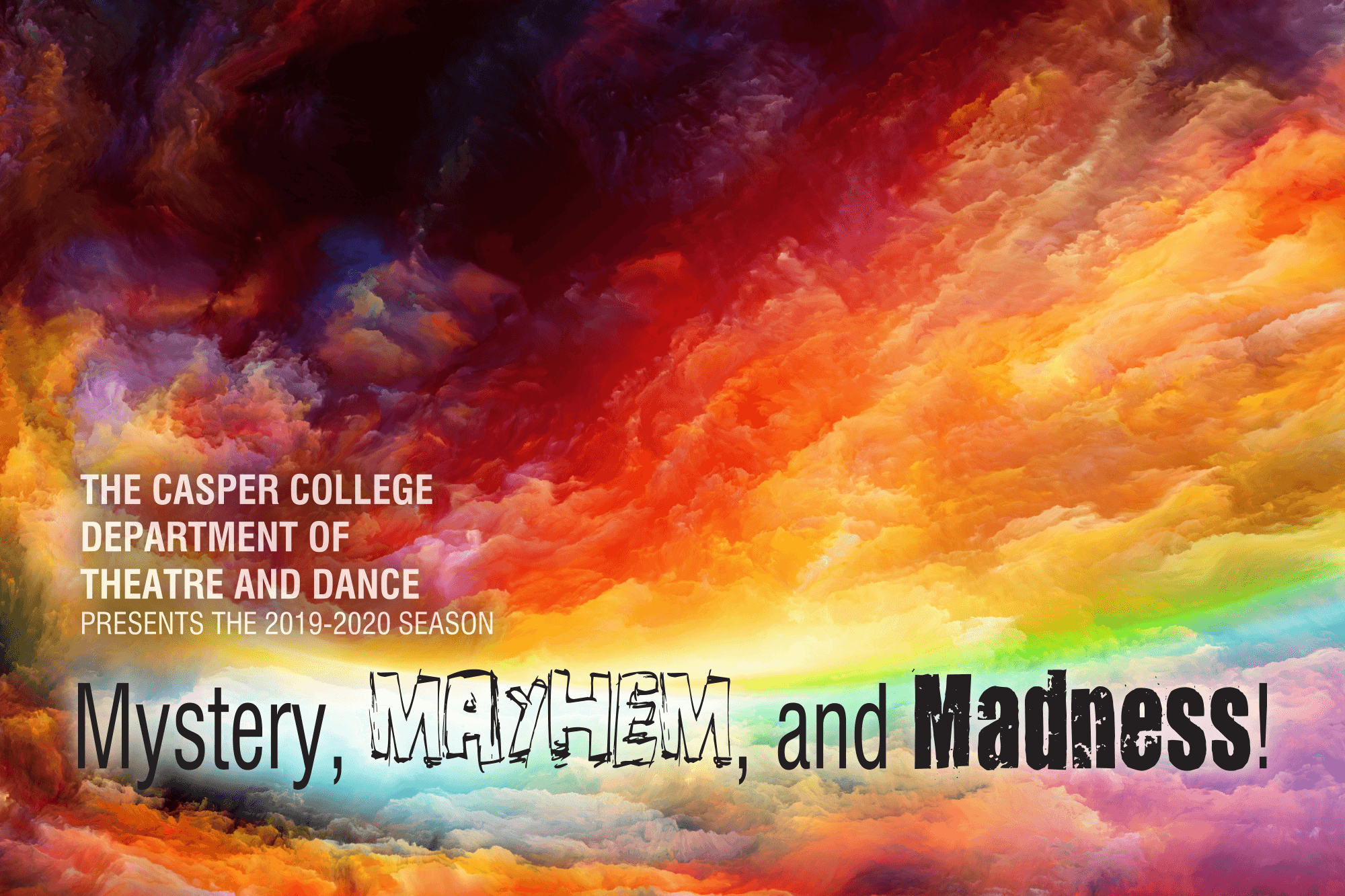 The Casper College Department of Theatre and Dance will look at “Mystery, Mayhem, and Madness!” during the 2019-2020 season.

“I am very excited about this year’s season of ‘Mystery, Mayhem, and Madness,’” said Chontelle Gray, theatre and dance department chair. “We have begun our design meetings and are already at work on these productions. Our students are adding their energy and talent to the first production, and the crew is busily working on creating these productions and seeing them to completion,” Gray said.

The season will kick off with “Children of Eden.” Under the direction of Richard Burk, choreography by Jodi Youmans-Jones, and musical direction by Johanna Swisher, the musical will run October 9-11 and 16-20 on the McMurry Mainstage. “’Children of Eden’ is a story adapted from the first nine and a half books of Genesis. It tells the story of a family: the children in Eden, Adam and Eve, their children and grandchildren, through the family of Noah. This is a great story told in a fantastically entertaining performance style with wonderful music,” said Gray, who noted the musical “… will be a delightful production for the entire family.”

The next offering known as “Marat/Sade” — full title “The Persecution and Assassination of Jean-Paul Marat as Performed by the Inmates of the Asylum of Charenton Under the Direction of the Marquis de Sade” — will be directed by William Conte, Ph.D. “’Marat/Sade’ is an interesting piece which portrays the final days of Jean-Paul Marat and the French Revolution,” said Gray. According to Gray, the play “… is a depiction of class struggle and human suffering that asks whether true revolution comes from changing society or changing oneself. “Marat/Sade” is suitable for ages 14 and up and will be performed in the Thomas H. Empey Studio Theatre November 26-27 and December 3-7.

Aaron Wood will direct this year’s dance production. “The Yellow Wallpaper” will be performed on the McMurray Mainstage February 20-23 and 27-29. The dance is an adaptation of the short story “The Yellow Paper” by Charlotte Perkins Gilman. “It is a beautiful piece which will bring the audience in both physically and emotionally as we look at the effects of isolation as a treatment for mental illness,” Gray said. The production will incorporate projection “… and the lines between individuals and their environment will become beautifully blurred. ‘The Yellow Wallpaper’ will be so stunning, though some of the themes may be difficult for children to understand, it will still be suitable for the whole family,” Gray noted.

The final event for the season will be the comedy “Noises Off” April 23-25, 29-30, and May 1-2. Directed by Richard Burk, “’Noises Off’ will give the audience a look at a theater production during final dress rehearsal, backstage, and later in the run as the production moves toward chaos,” Gray said. “It is a funny, crazy play within a play which will keep the audience laughing from start to finish,” she added.