Public Invited to Unveiling of New Displays at Werner 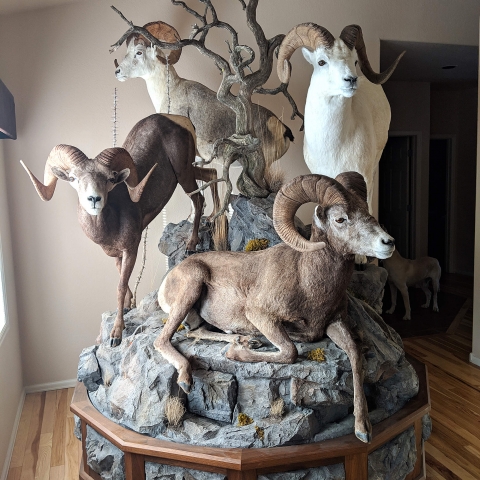 This beautiful mount, featuring a Stone, Dall, bighorn and desert bighorn was recently donated to the Werner Wildlife Museum. Photo courtesy of the Johnson family.

The public is invited to a special “unveiling” of two new displays at the Werner Wildlife Museum on Tuesday, April 2 at 11 a.m.

The displays are a North and Central America wild sheep grand slam and an Alaskan grizzly bear donated to the museum from the Johnson family of Casper. The family also donated a mounted elk head.

“The wild sheep grand slam is an amazing feat in itself, and the mounting of all four animals together is a piece of art,” said Patti Finkle, director of museums. “Each sheep is mounted in a unique stance on a single base. It is a showpiece, and it adds a dimension of reality and beauty to our current displays,” she said.

“I completed the slam in seven months with the Stone sheep, Dall sheep, and the bighorn sheep in back to back hunts in 20 days. The desert bighorn sheep was taken in Mexico; the Stone in British Columbia, Canada; the Dall in the Northwest Territories, Canada; and bighorn in Alberta, Canada,” said Mr. Johnson.

“We at the Werner are grateful for this donation and believe that such an amazing mount will provide a catalyst for folks to come and visit,” Finkle said.

According to Mr. Johnson, the grizzly was taken on Hinchinbrook Island in Alaska. The new mount stands in a life-like pose and has taken the place of the museum’s grizzly, 6-Toes. “We have plans to send 6-Toes out to be refreshed this summer, and it may take quite some time, so the donation of this new grizzly came at a perfect time,” Finkle noted.

Refreshments will be served during the unveiling event, which is free and open to the public. The Werner Wildlife Museum is located off the Casper College campus at 405 E. 15th Street. For more information call the museum at 307-235-2108 or email indiahayford@caspercollege.edu.