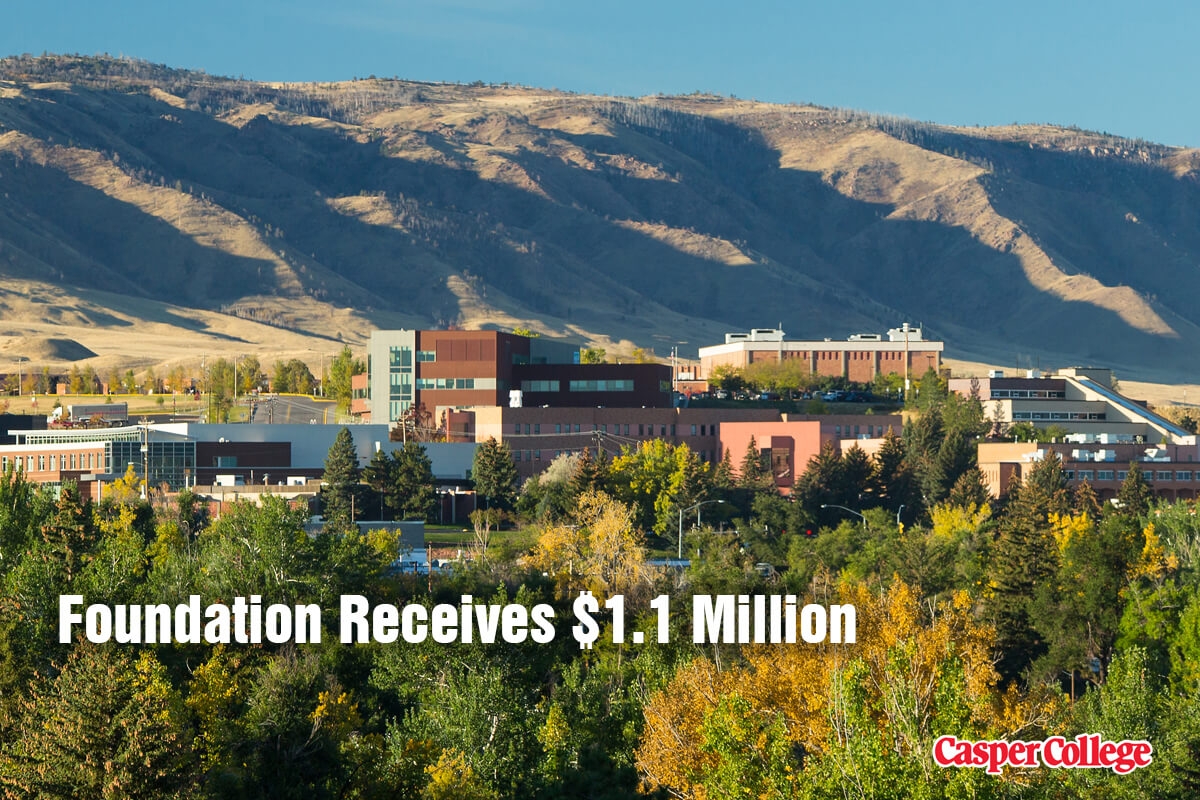 It started like any other day for Student Success Specialist Mary Lewallen, but early on that all changed when she was handed a check for $1.1 million dollars to further support the Neil and Doris McMurry Single Parent Program at the college.

“I received a call from the donor asking if I could meet with them,” said Lewallen, who has overseen the program since 2012. “We visited for a while about the single parent program, and then the donor said to me, ‘I would like to do something for you.’”

A checkbook appeared, and the donor calmly wrote out a check and handed it to Lewallen. She couldn’t believe her eyes when she looked at the figure: $1.1 million dollars specifically earmarked for the single parent program. Lewallen burst into tears. “You don’t know how many people this is going to help,” she told the donor who replied, “You guys are doing a great job.”

The single parent program at Casper College began with another generous $1 million-dollar donation from Neil and Doris McMurry back in 2000. That $1 million was the seed money for a program to help students who were also single parents with children. Originally named the Casper College Single Parent Grant-in-Aid Program, Neil explained his motivation for the generous donation: “I saw so many young women struggling on waitress wages trying to get ahead and not able to do it. If we could somehow help – not only them – but help the community, Doris and I felt we should do it. I thought it was a good use of money we didn’t need,” he added.

“Neil was a silent-giver,” said Lewallen, adding “He gave from the heart because he truly cared for others.” According to Lewallen, it was important to McMurry that the “red tape” be kept to a minimum. “His goal for this program was to assist single parents with completing their education and becoming better skilled for the workforce,” she said. With the McMurry’s goal in mind, the newly created program began by providing those qualifying with financial assistance to help offset the cost of attending college.

Over the years the program has evolved beyond the financial aid award to include a textbook loan program; school supplies; emergency assistance; gas cards; academic and career guidance; and campus, community, and medical referrals.

Gas cards, for example, are a useful component of the program. If a student’s car runs out of gas, it becomes hard for them to go to work let alone attend school for that day. “We want them to be able to keep their tank full and be safe,” said Lewallen. Over the years, the program has also paid for unexpected emergencies including flat tires and eyeglasses. “If we can take something off their plate so that they can attend school, we want to do that,” she said.

The program’s textbook loan program is especially helpful for those students who can’t afford some of the pricier textbooks. Each semester Lewallen looks over the classes that students in the program will be taking and then makes sure that she has a supply of those textbooks for the students to use.

For the future, a financial literacy program and additional career preparation assistance are planned among other things, according to Lewallen.

To qualify for financial assistance, students must be the custodial parent of their child or children, have not yet earned an associate or higher degree, and be in good academic standing. Lewallen keeps an eye on each student: “I keep track of their academic progress, and if they go below the required 2.0 grade point average they are put on financial aid probation. But I keep them waitlisted to give them a chance to pull up their GPA and complete school,” she said.

Students who find themselves on probation are not left out in the cold, however. “Even though they don’t qualify for the scholarship, they are still eligible for the other benefits like textbooks and emergency funds,” Lewallen noted. If she hasn’t heard from a student in a couple of weeks, Lewallen will contact them to see how they are doing and if they might need help. “I want to catch them before they withdraw,” she said.

Community partnerships, developed over the years, are also a big part of the program. “If we can’t help our single parents, then we are able to point them to our community partners,” Lewallen said. According to Lewallen, reaching out to the community over the years has also helped the program. “We have gotten so much back including baby and kids clothes, laundry detergent, diapers, etc. The support we have gotten from these partnerships is huge and has been a blessing for us,” she said.

Three people have overseen the program since its inception: Barbara Ochiltree, Kim Byrd, and Lewallen. Byrd, now vice president for student services, took over the program in 2004 when Ochiltree moved to the college’s Adult Learning Center. She vividly recalls another donation made by the McMurry’s in 2008. “I was handed a million dollar check by Neil, but Paul Hallock, (then director of the Casper College Foundation), had to basically beg to get me to come in (without telling her why). It was over Christmas break, and I didn’t want to get dressed – I was still in my PJs and was cleaning out the refrigerator.”

The gift was to be split evenly between the single parent program and the Casper College Early Childhood Learning Center, another program that was important to the McMurry’s as well. McMurry’s $1 million-dollar gift was matched by the Wyoming Community College Endowment Challenge Matching Program so that both the single parent program and the ECLC each received $1 million. In the photo taken that day, Byrd looked happy but stunned as she holds the million dollar check with Neil at her side.

Byrd also remembers a lunch she attended with Neil and members of the Casper College Foundation. The topic of the luncheon centered on how much money from the interest earnings would be spent on the single parent program for the following year. “I thought we were going to have to cut some single parent scholarships as we hadn’t earned as much interest on the endowment,” said Byrd. “Neil and I were across the table from each other. When the figure was presented, he looked at me, without the others seeing that I had made a motion to him that that amount wasn’t enough,” she said. Until McMurry received the all-clear from Byrd, he continued to ask the foundation to raise their percentage several times before “… he knew that I was comfortable with the amount we were going to get so we didn’t have to cut anyone’s scholarship.”

The success numbers for the program are impressive. As of August 2018, 659 single parents have received assistance from the Neil and Doris McMurry Single Parent Program to assist with their educational needs. As of May 2018, 334 single parents have completed a total of 260 associate degrees and 66 certificate programs all while maintaining an overall GPA of 2.824 and a completion rate of 54 percent, which Lewallen noted was higher than most college completion rates.

During a reception held for Neil and Doris McMurry in 2006 to honor the couple for their generosity over the years, Neil addressed the group: “We are very happy to be able to do this. I am especially happy to see the quality of young people who have taken advantage of this program; it bodes well for the future of Casper,” he said.

Indeed, the generosity of the McMurry’s, as well as that of the program’s most recent donor, bodes well for the future of the program and its continued success as it helps the single parents of Casper College make a better life for themselves and their children.