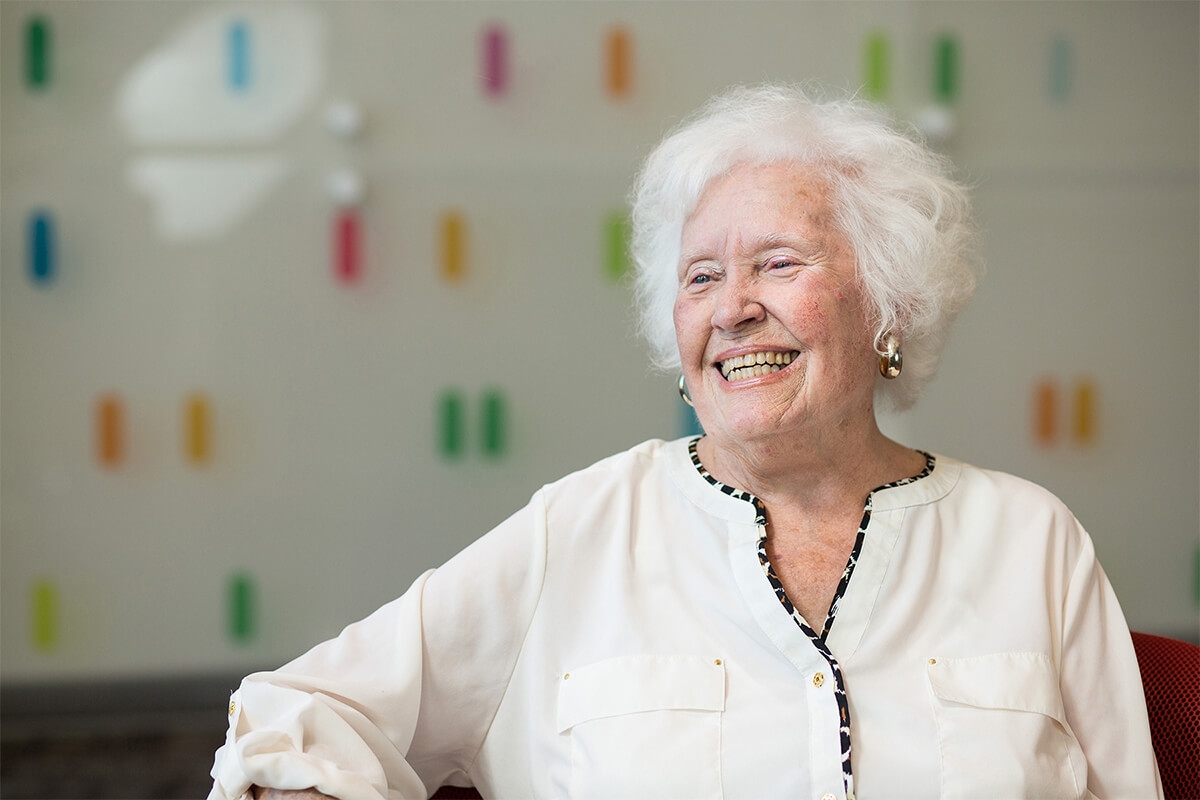 Babcock, who graduated from Casper College in 1949, was on the original short-lived Casper College Alumni Association in 1950. In 1989 the current alumni association was formed, and Babcock started on the association’s board in 1990. She remained a board member for the next 26 years during which time she served as the president from 1994-1996.

During her tenure as president for the alumni association, the college celebrated its 50th anniversary with a weekend event with much of the planning of those events spearheaded by Babcock and the alumni association. The celebration included a banquet that recognized 50 exemplary alumni, of which Babcock was one and the unveiling of the “Spirit of the Thunderbird” bronze statue by sculptor and Casper College alumnus Chris Navarro. She was also involved in the association’s $100,000 gift pledge toward the renovation of the Gertrude Krampert Center for Theatre and Dance. Through her efforts, the association also changed its fundraising strategy from a phone-a-thon to the pages of its magazine Footprints.

Babcock for many years was involved in the selection of alumni scholarship recipients. Upon the passing of her husband Robert in 2003, Babcock established the Babcock Memorial Alumni Academic Scholarship in his memory. Today the fully endowed scholarship is worth $1500.

Beyond Casper College, Babcock has been president for a number of other organizations including the American Legion, the PTA at East Junior High School (now Casper Classical Academy), Friends of the Library, and Wyoming Writers, Inc. In addition, Babcock was a member of the PTA of Willard Elementary; a charter member, historian, and for 13 years choir director, at St. Patrick’s Catholic Church; a founding member and president of the Bishop’s Guild of Casper; a member of WyoPoets; and a volunteer for The Nicolaysen Art Museum’s gift shop. Babcock was also instrumental in the creation of the large historical plaques detailing the history of the Hotel Townsend that hang in the Townsend Justice Center.

After her two daughters were in the school system Babcock spent 26 years as a teacher, … “and a lot of it was substituting, … I had a kindergarten, a Monday kindergarten, and I worked in special ed. I had a second-grade class, I had a sixth-grade class, and mostly substituted at Pineview School,” she said. During the 1970’s Babcock owned Charlotte’s Flowers which was located in the Hilltop Shopping Center.

Throughout all of this, Babcock became a published author writing feature articles for the Casper Star-Tribune; a book on the 25th anniversary of St. Patrick’s Catholic Church, “The Saint Patrick’s Story;” a book on early Casper, “Shot Down! Capital Crimes of Casper;” and most recently a collection of her poems titled “The Meadowlark’s Song… and More.” Her works have appeared in the books “Woven on the Wind,” “Crazy Woman Creek,” “Windsingers,” “Word Weavers,” “Wyoming Writing,” and “Westering.” Her column,” According to Charlotte” is a regular feature of the Casper College Alumni Association’s magazine Footprints. Babcock is adept in many genres including fiction, nonfiction, poetry, and children’s literature.

Babcock has been recognized by Wyoming Writers, Inc. with the Emmie Mygatt Award for outstanding service to the organization and, following the publication of “Shot Down!,” their Milestone Award for her ongoing achievement in her writing career. In 2000, the Wyoming State Historical Society awarded “Shot Down” with its History Book of the Year award. In 2001 Babcock was recognized as a “renowned author, freelance writer, and editor” by the City of Casper and the American Association of University Women.

Babcock has been working on a sequel to “Shot Down!” that will delve into Casper’s notorious Sandbar.