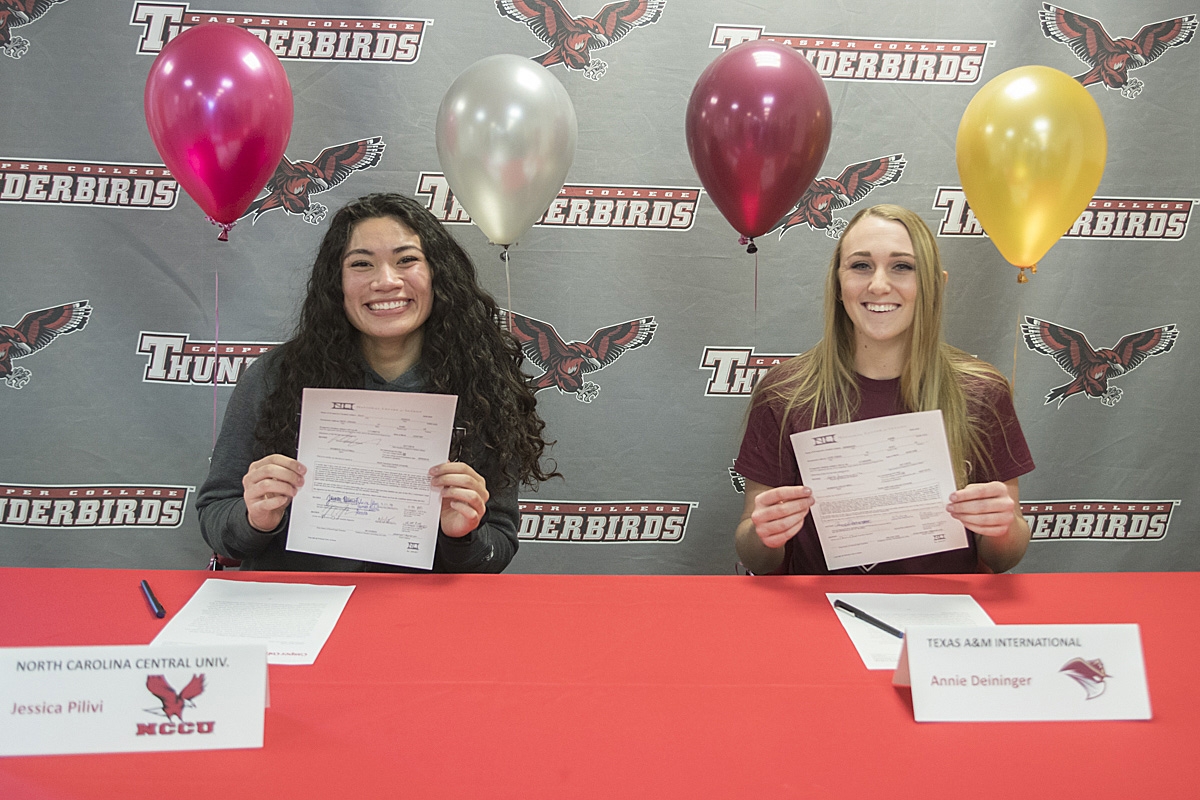 Casper College Volleyball players Jessica Pilivi (l) and Annie Deininger (r) are all smiles after signing their letters of intent to play volleyball at the university level. Casper College photo.

Casper College Volleyball players Annie Deininger and Jessica Pilivi signed their official letters of intent to play volleyball at the next level on Wednesday, April 18. Both Deininger and Pilivi played as outside hitters for the Birds during a season that saw the team go 13-23.

Deininger at 5’ 10” will join the Texas A&M International University Dustdevils, who went 2-24 in the NCAA Division II Heartland Conference. The team is coached by Susie Jangada, who took over the Dustdevils in February 2015. “Annie’s a very gifted athlete who touches over 10′ and is versatile enough to play at either pin! She’s very smart and approaches her training and the game from a student’s perspective. During her visit her bubbly personality allowed her to instantly connect with our current team and we can’t wait for her to arrive on campus,” said Jangada in a recent interview. A public university, TAMIU is located in Laredo, Texas.

Pilivi will join the North Carolina Central University Lady Eagles. The Lady Eagles play in the NCAA Division I Mid-Eastern Athletic Conference where they compiled a 4-20 record for the 2017-2018 season under Head Coach Jody Brown. Brown will enter his third season in 2018-2019. In his first season at NCCU, Brown returned the Lady Eagles to the MEAC Volleyball Championship Tournament. NCCU is a public university located in Durham, North Carolina.

“They both have improved from the two years when they have arrived. Annie and Jessica have a great work ethic which will continue to grow, and they will make a big impact on their new teams. I am excited to watch them grow more and succeed,” said Thunderbirds Head Coach Angel Sharman.