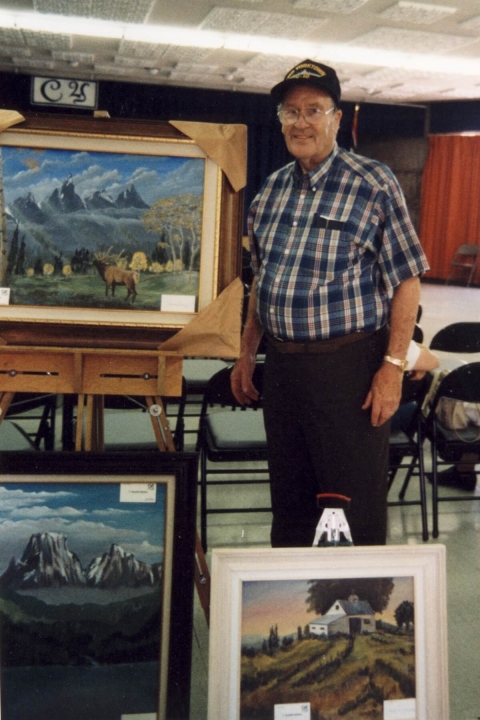 In 1985 Wendell Culbertson retired from Conoco, where he had worked for 36 years. At that time, the oil industry was still in the midst of a downturn, so Wendell considered himself fortunate to be offered early retirement at the age of 64. He began working towards his Associate of Arts degree in earnest in the fall of 1985. Now 95, Culbertson recently spoke with his granddaughter, Becky Wise (AAS, 12’), about his life and time at CC.

One day my late wife, Arlene, and I were at the library, and Arlene said to me, “Do you like these pictures on the walls?” “Yes,” I said, “I think they are pretty good, but I think I could do a better job than some of these.” Arlene didn’t say anything more, but Christmas came and there were odd sized packages under the tree. I was surprised when I opened them and saw a box of paints; red and yellow and blue in about eight or 10 different tubes. Then I had a package of paintbrushes with three or four different paintbrushes. Finally, there was an envelope enclosing a coupon to attend art lessons with a fellow who studied under the Queen of England in Europe, who would be giving lessons in Casper for five or six weeks. I was quite surprised. In January when those lessons started I began painting in oil. I liked it pretty well and decided to keep going, knowing I would be retiring soon.

In 1985 I started at Casper College, immediately after I retired. I went two full years, studying other subjects beside arts to get my degree. Before World War II I took two years of classes at Central Bible Institute in Springfield, Missouri. However, I was drafted into the Navy before obtaining my degree. In the Navy I took two years’ worth of courses related to electrical engineering over three months at Oklahoma Agricultural and Mechanical College, (now Oklahoma State University), followed by six months of top secret RADAR training at Ward Island in Corpus Christi, Texas. After 39 months of active duty, I spent one year at Joplin Junior College then continued classes at the University of Colorado at Boulder, all related to electrical engineering. In total, I had six years of college courses without gaining a degree. I made the decision to get a degree in art instead of simply taking a few more art classes as an effort to finalize what I started. The decision for a degree was also tied to my involvement with Gideons International, an association of Christian business and professional men.

Before my formal art training, I sketched a lot while working for Conoco. While I was waiting for a helicopter to come pick us up when we were working on the off-shore platforms, others would sit around and smoke while they waited, and I just sketched the things I saw around me; the oil rigs where we were drilling offshore, the work boats, different things like that. Wherever I went, my pictures became more or less a diary. I had three or four books used as diaries, which I still have today. As my wife Lola will tell you, I still sketch when we go out to eat, on a napkin, on a paper cup. I still enjoy it at 95. I’ve sketched five or six books of pictures, landscapes, a few personal pictures, but mostly landscapes, animals, and things I like.

I clearly remember one of my art instructors, Wilhelm Ossa, who was from Germany. I really hit it off with him, and he made an enormous impression on me. He showed me how to erase something in a painting; I could go over and paint it out. For example, I painted one picture of a bear in a stream catching a fish. In reality, that bear wouldn’t have stayed there all the time, but in the painting he did! So I went back and painted him out and put a rock there instead. That’s one of the paintings I have in my living room. In addition to Mr. Ossa I had other wonderful art instructors, including Richard Jacobi and Jim Gaither.

I experienced great fulfillment when I received my degree in December 1986. I felt like I was proficient enough to be called an artist, and not just someone who fiddled around with paints. I have about 60 or more paintings around the house today, many on the walls, some stacked up in the basement and in different rooms. My paintings are also in the homes of many family members and friends not only in Casper, but also around the country.

I enjoyed taking classes at Casper College. I was able to meet a lot of younger people and I felt young myself, even with the age difference.

This story originally appeared in the Winter 2017 issue of Footprints.