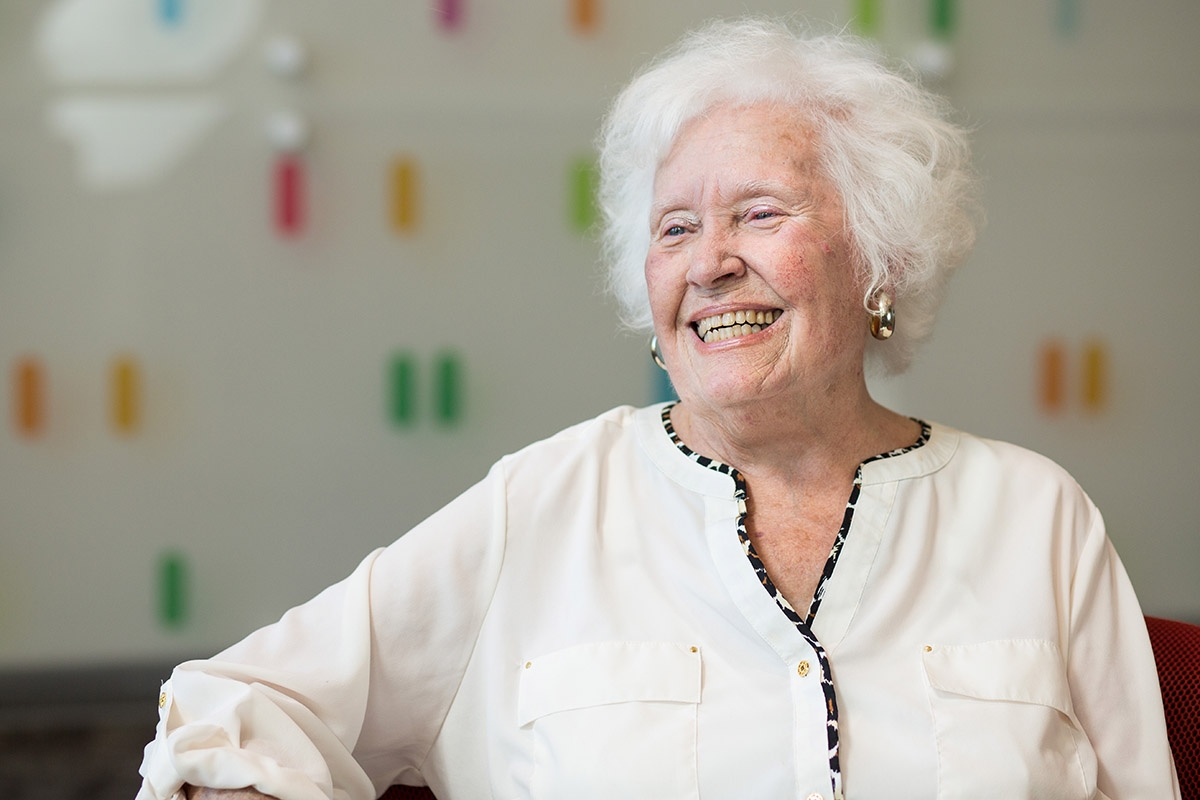 After 26 years of continuous service, Charlotte (Bennett) Babcock (AA, ’49) attended her last Casper College Alumni Board meeting as a member on October 15, 2016.

Had it not been for true love, however, Charlotte likely wouldn’t have even been a Casper College alumnus, let alone a board member.

It was during the spring of 1947 that Babcock met the love of her life, Robert Babcock. That fall she headed off to attended her first year of college at Rockford College, a girls-only college in Rockford, Illinois. Not wanting to leave the new man in her life she returned to her old stomping grounds for her sophomore year of college: Natrona County High School, where the fledgling junior college was housed on the third floor.

She was busy that year writing as the society editor for the school newspaper, Chinook, singing in the choir, going to the many social functions held at the school, and of course attending classes. Regarding her decision to leave a true four-year college and attend a two-year school in her hometown, she feels that it was “serendipitous that I came back to Casper and attended a terrific school. I don’t feel like I missed out on anything and I loved every teacher I had. They were so personable and not standoffish at all like those at Rockford who were longtime professionals and aloof.”

Babcock took classes from the who’s who of early Casper College faculty: Bill Curry for English, Fred Hanselman for French, Eleanor O’Brien for Spanish, Earl Reed for interior design, Ken Ury for psychology, and Russell Schwejda for choir, to name just a few. “Those were wonderful times, and an exciting year as Robert and I eloped in May by flying up to Billings, Montana, on Western Airlines, and then shortly thereafter I graduated from Casper Junior College as it was known then.”

In the late 1950s, Babcock was asked to join the newly formed Casper College Alumni Association. As she recalls, the group held a get together at Casper’s then hotspot, The Riverside Night Club, and published at least four newsletters. The former Chinook society editor penned the column “Just Reminiscing” and wrote this in the first issue: “After looking at this breathtaking new building (likely the Arts and Sciences Building, now known as the Saunders Health Science Center, which was completed in 1958 and occupied in 1959), and all these new faces, I am appealing to you of the ‘old guard,’ so to speak. I am beginning to realize that I’m getting old …” The first alumni association eventually folded because it received, as Babcock recalls, little support from the administration.

The current alumni association was formed in 1989 under the guidance of then Director of College Relations, Bill Landen (AS ’76). Babcock came on a year later when she was asked to fill out the remaining term held by Fred Niethammer (ABUS, ’47). She started her own ‘term’ in 1991.

When this second incarnation of the alumni association began, it operated on a shoestring budget. To raise operating funds, it was decided that a phone-a-thon would be held. As Babcock recalls, phone banks were set up in the old administration building gym and board members would volunteer to spend about two hours to call other alums for a donation. The process took several weeks and members worked alongside a few student volunteers. “This was something that I did not enjoy – in fact, I pretty well hated it,” she says.

To show how much Babcock truly did hate that form of fundraising, she considers her biggest accomplishment during her tenure on the alumni board her idea that took fundraising off the phone banks and into the pages of the alumni magazine Footprints.

It is surprising that Babcock doesn’t consider the successful 50th-anniversary celebration of Casper College in 1995, which she calls “a tremendous success,” as her biggest accomplishment. Babcock was board president from 1994 to 1996 and remembers “working hard on the menu, which was wonderful; flaming desserts, cherries jubilee, and bananas Foster! The whole board worked really hard as we recognized 50 exemplary alumni at the banquet, (Babcock was one) dedicated the ‘Spirit of the Thunderbird’ statue, and just had a lot of fun.” In addition to the banquet and 50th celebration, the group raised funds through the sale of “Spirit of the Thunderbird” maquettes and contributed to the Krampert Theatre renovation. The association pledged $100,000 to the renovation and completely fulfilled that pledge in September 2006.

Upon the passing of her husband Robert in 2003, Babcock established the Babcock Memorial Alumni Academic Scholarship in his memory. Today the fully endowed scholarship is worth $1500. “This reminds me that the Babcock family is a three-generation family of T-Birds. Me, my two daughters Linda Coatney and Vickie Quisenberry, and Linda’s daughter Roxanne Newland all graduated from CC.”

Over the years Babcock has seen the college footprint expand with the construction of new buildings, and seen the alumni office grow from a part-time staffer to a full-time associate director position. She also got to know many CC employees, “from the president down. There are a lot of pleasant memories here. Everyone was always cordial and visiting was great,”
she notes.

“I thought that it was maybe time for a bit of new blood on the board,” she says of her decision to retire. “It was really a sad decision. I stayed on the board for as long as I did because I really, really am devoted to Casper College and all of its development and opportunities and wonderful things it has become over these last 26 years.” Her only regret: “I brought up the fact that the college needed to bring back the yearbook at various board meetings, but it never got anywhere. In fact, I brought up a lot of things that got shot down, but I never let that stop me!”