Casper College and Beyond: What Can’t She Do… And Into the Future 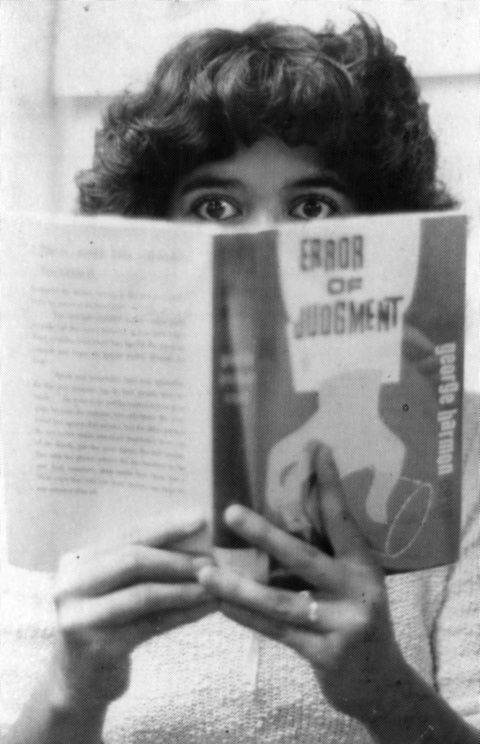 In this photo from the Casper Journal Collection of the Casper College Western History Center: “Wide-eyed suspense is displayed by Chris Hoffman, library staff member, as she gets to the exciting part of her mystery book.”

A postcard couldn’t capture the beauty of that day. Chalk it up to Casper Mountain as a backdrop that quickly evolved into a scene out of a Disney movie as antelope munched on the lush lawn at Casper College. This moment lived up to the hype that I’d been prepping my kiddos for on the drive from Denver International Airport for a summer visit during July 2014 with family in Wyoming.

“This is it!” I said as we excitedly looked out the car windows. It takes a lot to impress our 22-year-old daughter Lauren and 18-year-old son Stephen. But finally getting to see the college that their dad Rollyn and I not only attended, but where we met had them giddy.

Yet, there was reason to celebrate. Visiting Casper College was a homecoming. I credit the college and my experiences, while attending it, for pivotal moments in my life.

I graduated from Powell High School in 1979. I picked Casper College because I liked what I read about it. Didn’t even tour it. After I arrived in August, the next few years became a blur of activities. My freshman year, I was elected to the student senate. I still proudly have a Sept. 21, 1979, copy of the Chinook, with my newbie face on the front page, with a quote vowing to bring more student activities on campus.

As a political science major, I found refuge in a freshman composition class. I loved to write. My professor shared my stories with the class. Classmates called me “teacher’s pet.” I credit this professor for instilling the idea that I could become a writer. I don’t remember her name but would love to let her know the profound affect she had on my future.

I paid for all of my college. So I nabbed as many hours as possible at the Casper College Library working for librarian Laurie Lye. That’s where I met Rollyn Coats (’77) or “Rollie” as he’s known by family and friends. A Casper College alum, he just graduated from the University of Wyoming with a degree in finance. He was making copies and I noticed that he left his originals. I chased him down the sidewalk to give them to him. We ended up marrying three years later and will be celebrating our 34-year wedding anniversary this June!

One of Rollie’s best friends was Bill Landen (AS, ’76), sports editor of the Casper Star-Tribune. I just thought that Bill had to have the coolest job ever, writing for a newspaper audience.

I ended up working full-time in 1981 for the Natrona County Public Library in downtown Casper as a library clerk, while still going to school. I used to write a staff newsletter for fun, even illustrating it with cartoons. That was a sign of things to come.

We built a strong group of friends, like Vicki and Tom (ABUS, ’75) Barrett. Tom knew Bill from both serving on the Chinook during their Casper College years. Vicki was our powerhouse pitcher on our softball team, the Zales Diamondettes.

Rollie and I eventually moved to Laramie to attend school at the University of Wyoming and we both graduated in 1985 and wondered where we’d land a job. The Wyoming economy wasn’t great and the chances of us both nabbing an accounting job in one town? Zilch.

Rollie’s dad had moved to College Station, Texas. We heard that Tom and Vicki moved to Dallas. We contacted them and soon headed south to the home of J.R. Ewing and the Dallas Cowboys!

We nabbed great accounting jobs, passed our CPA exams, and loved life in Dallas. Our daughter Lauren was born in 1991. While I loved my career, I realized that I wanted to write – children’s books for starters.

I became driven to become a writer. While on my maternity leave in 1994 with our son, Stephen, we had worked for me to stay home full-time with our kiddos. I’d still work whatever odd jobs I could like bookkeeping, working from 10 p.m. to 2 a.m. after the kids went to bed. I’d also started writing diligently in my spare time.

I secured a gig writing a weekly advice column that ran in 10 Texas newspapers (I wanted to be the next Ann Landers or Dear Abby) and I also was the newsletter editor for a newfound children’s TV sensation, Barney, the
Purple Dinosaur.

By September 1995, I landed my biggest writing gig – freelancing for People magazine, then eventually hired as a staff reporter. My reality existed in reporting on everything from breaking news stories to the celebrity beat. I became friends with many celebs, like Britney Spears, and their families.

In 2002, I accepted a senior editor position with Us Weekly, the celebrity magazine. I trained freelancers and covered stories across the country like the Country Music Awards to the Emmys and even the Super Bowl – basically all A-list celebrity events.

I loved my job. The travel? – Not so much. After a while, I didn’t care if I interviewed Brad or Angelina or any A-list celeb, I missed my family. I always wanted to make a difference by teaching and decided to give it my all.

I chose to teach at a school whose students came from predominantly low-income households and a highly diverse student population. I loved my role as a journalism teacher and campus relations director. I still did my celebrity journalism gigs on the side, and as a weekly columnist for The Dallas Morning News. My routine – one day I’d teach then catch a flight the next morning for Nashville to be on the red carpet that evening interviewing Taylor Swift and Carrie Underwood at the Country Music Awards. In 2013, I was awarded Texas Secondary Teacher of the Year by the Texas PTA out of thousands of candidates statewide for making a difference at our school.

I dreamed of one day taking classes at Harvard. After winning my award, I applied for a leadership program through Harvard University’s Graduate School of Education and got accepted. I’ve taken various classes (on campus and online) and continue to do so.

I dreamed about teaching college. Ironically, it started when I was studying for my CPA exam in 1986. I studied at a library at Southern Methodist University in Dallas every night after work.

In 2015, I was asked to speak to communications students at SMU about my career. I jumped at the chance. That led to a chain of events where I now teach at SMU. I teach students the ins and outs of what it takes to be a journalist and public relations representative. I’ve also started my own PR/social media firm, where my clients range from Hollywood celebrities to business owners. I still have books to write and I’m launching an online magazine.

I have two dreams yet to accomplish – to teach a summer school class at Casper College and the University of Wyoming – what full circle moments! If it wouldn’t have been for my experiences, professors, and friends that inspired me along the way at Casper College, I wouldn’t be the person that I am today – we’re still friends with the Barretts and stay in touch with Bill, too. More importantly, I wouldn’t have met the most important person in my life, my husband Rollie, who has been my biggest supporter. He’s now a senior tax manager for a multi-million dollar oil and gas company.

This story originally appeared in the Summer 2016 issue of Footprints.