Lessons from the Field 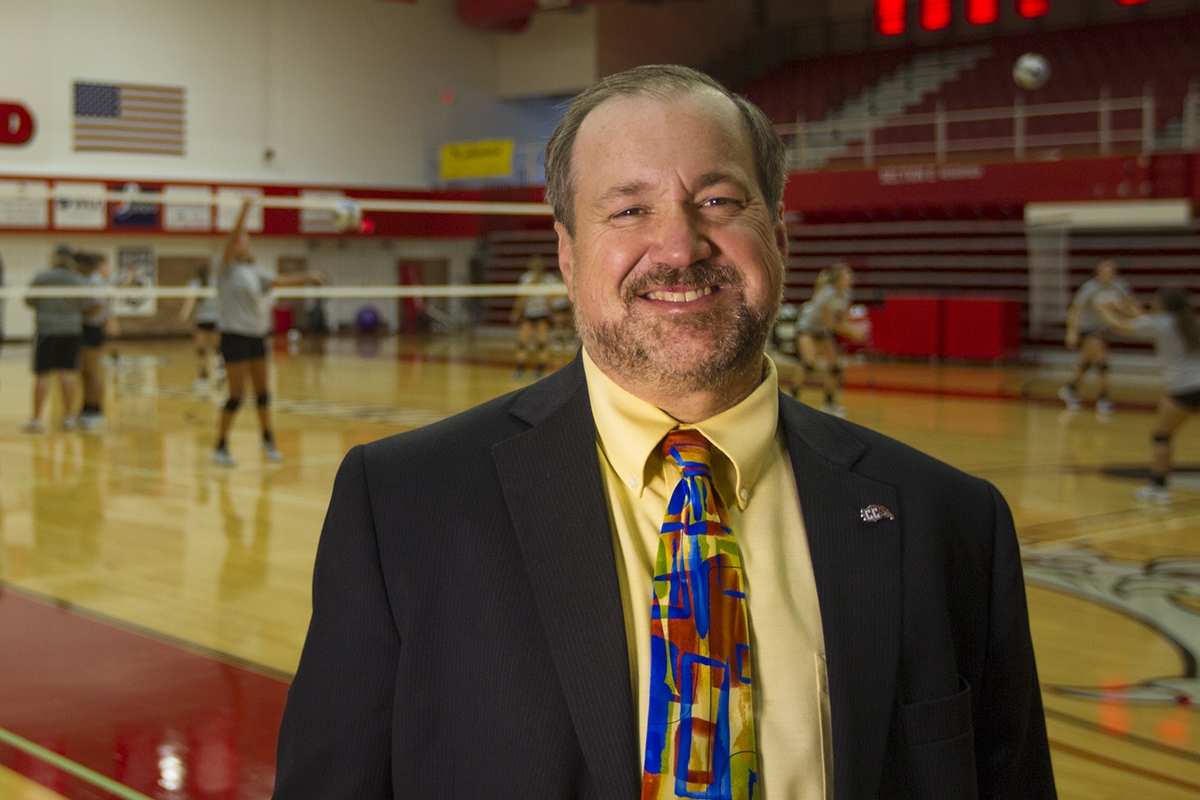 The selection of a college president is much different than what would occur at a Fortune 500 company.

While most large businesses look for someone with an MBA or a degree in finance, a college often hires a president with a degree that could be viewed as less applicable. Dr. Leroy Strausner oversaw Casper College from 1991 to 2004 after beginning his college career teaching sociology and psychology classes. Dr. Walter Nolte brought his background in history to the presidency during his 11 years at Casper College. When Dr. Darren Divine was hired as the college’s sixth president this past summer, his resume offered a bachelor’s degree, a master’s degree and a doctoral degree in biology. Someone with business training might question how the college can continue to excel with such varied backgrounds. Perhaps certain leadership skills are picked up in different settings.

During an hour-long interview with Divine, he talked about his six years as a field biologist, first identifying the availability of water near White Sands Missile Base in New Mexico and then tracking desert bighorn sheep in Nevada and California. At the time, he wasn’t thinking of becoming a college president, though he does admit that he often pulls lessons learned from that field experience into his executive office in the college’s Walter H. Nolte Gateway Center. The following are seven such lessons.

As a biologist, Divine quickly learned a simple mantra: you can never only change one thing. In wildlife management, the research indicates that once a person steps in and starts managing a population, that person may never be able to stop.

“With one change, even a tweak, there are so many ripples, that you may never be able to walk away from the population,” Divine said. “You discover that things are always constantly in flux, that things are changing all the time and not always as one might expect.”

Consider the mosquito. For the last 100 years, countries have undertaken numerous efforts to eradicate this carrier of malaria and spreader of yellow fever, dengue fever, Japanese encephalitis, West Nile virus, and today’s Zika virus. And while eliminating mosquitos might end the annual malaria infection of 250 million people worldwide, as well as the mosquito’s general nuisance factor, some scientists have theorized what eradication might mean. For example, many types of insects, birds, bats, spiders, salamanders, lizards, and frogs would be deprived of a primary food source. Destroy the mosquito and thousands of plant species would forfeit a key pollinator. Then there are the caribou in the Arctic, where mosquito swarms feast on approximately 10 ounces of blood a day from each animal in the herd. To escape these swarms, caribou are believed to select paths that face into the wind. Without mosquitos, might the caribou change their migration routes? If yes, how might that change the Arctic terrain?

Divine considers this idea in the college setting whenever he implements a change. He said the common wisdom is that if the change is not working, someone must step in and try to fix the problem. “Just because something is changing doesn’t mean you need to step in right away,” he said. “Sometimes you have to step in, if it’s serious, though sometimes you can wait. I don’t want to make it worse. I may sit back and watch it, if I can, and see how it plays out. That may just be my personality, though I have found this approach to be successful in most cases.”

Lesson 2: Be Open to Discovery

The harsh desert heat beat down on Divine as he sat on the edge of a cliff watching the bighorn sheep 200 yards away. The collared ram was walking around a barrel cactus, looking down on it with interest. He kept circling the globe-shaped cactus, eyeing it with great concentration. Through his binoculars, Divine was captivated. “I just kept thinking, ‘what is
he doing?’”

Without warning, the ram bashed the top of the cactus with the top of his head. A second strike, and the ram ate the fleshy fruit from the center of the plant. The moment stuck. Even though he was not studying how bighorn sheep find water in the pulp of the plant, Divine realized he had learned something unforeseen. “I later talked to some fellow wildlife biologists who said when they do sheep captures, they often find cactus thorns in their horns.”

The lesson here is that with any problem, expect the unexpected. As an example, Divine points to colleges that charge students a graduation fee once they have completed their studies. Rather than collecting a small bit of revenue, these colleges soon discovered that their graduation rates had declined because students refused to pay this charge.

During his time as vice president for academic affairs and student affairs at the Community College of Southern Nevada, he led a team to see why students who had been accepted to the college weren’t enrolling. The 1,000 students in question had filled out an application but did not come to the campus for classes. What was happening here?

“So we started talking about how to approach this issue, and we came up with something that I thought we would never consider nor even might work,” Divine said.

Someone suggested robo-calling, which uses a computerized auto-dialer to deliver a pre-recorded message. Used often in political and telemarketing campaigns, the message often sounds like it comes from a robot, something that Divine thought would be ignored by the students. Instead, the team was able to collect some strong data about why these students failed to progress.

“Many of us were surprised by the results. The point here is that you have to be open to new ideas and new learning,” he said. “And it only happens if you are paying attention.”

Divine has heard the debate between hard scientists and social scientists many times. The thought of it makes him smile.

“As a natural scientist, I was trained from the get go that if I can’t statistically prove that two things are different or the same, then I can’t say it. I must be able to show you how I got there, and if can’t show you the data, then I can’t affirm or deny anything.”

This doesn’t always work as a college president. While he believes strongly in the value of hard data, he understands the social scientist who says anecdotal information has value as well. For example, as a president, he is expected to read people and figure out levels of trustworthiness and reliability. “This won’t sound very scientific, but there are important things you can’t statistically prove that you know are true,” he said. “You can call it a gut feeling. That is the social science aspect that I have learned to appreciate. It’s not all cut and dried.”

The scientific method begins with a question: What are you trying to discover? That natural curiosity has translated well into Divine’s presidency, where he is expected to interact with all kinds of people.

“I really like learning new things, which is a great thing about his job,” he said. “I love talking to people and asking them about what they do.”

Divine said he really likes understanding how things work. If he doesn’t know, he asks someone. The questions don’t stop until he fully understands.

The office of a field biologist is often an open patch of land out in the middle of nowhere. You camp out, you eat next to a campfire, and carry most all of your belongings in a small knapsack. “For some odd reason, people think the life of a biologist is glamorous,” Divine says with a laugh. “But it’s far from it.”

He tells stories of tracking bighorn sheep in a small non-air-conditioned plane, fighting back nausea, nervousness and vomit during the bumpy six-hour ride. People hear airplane, and they think elegance. He says the word and thinks Dramamine®.

“I suppose people think the same thing about a presidency, especially because we have nice offices and big desks,” he said. “But it’s not all that glamorous. Often it’s hard work.”

He said one of the difficult aspects of his job is the expectation that he always has the right answer. More trying, however, is the belief that he must behave as a president wherever he goes. “I am expected to be on, even when I have a cold or am just feeling grumpy. I must always present my best self.” He said that in such a high-profile position, there are some people who expect to see him in a suit and tie at all times. But he is just as comfortable in jeans and boots, one of the big advantages of a presidency in Wyoming.

Lesson 6: Learn from Your Experiments

Each night, on his drive home, Divine replays his day in his head. He spends a little time on what went well, and concentrates hardest on what things he could have done better. “I don’t tend to remember those things that worked. Most often, I remember what I did that went badly.” He admits that while he is hard on himself, such daily reflection is how he has improved over the years as a leader. In the field, this would be much like running your experiment, checking your results and possibly making modifications.

Lesson 7: You Must Be Self-Sufficient

There’s no good time for a flat tire. On this day more than 20 years ago, Divine stood alone on the side of the desert road in temperatures that were well over 110 degrees. The heat off the asphalt could sizzle bacon, and now Divine had to crawl under the truck and set the jack. Coaxing the truck upward, he quickly learned that the jack was off-kilter. Move forward several years to another vehicle incident in the desert, this time with a large truck that had three wheels sitting off the ground. Aided by two fellow biologists, Divine offered the team two options: a 10-mile hike to the nearest phone or some thoughtful improvisation because the three men lacked a shovel. They picked option B, once they located some flat rocks and conduit. In only two hours, they were able to dig away enough earth to get a second wheel to touch the soil.

“What I learned early on in the field is that you have to be self-reliant,” Divine said. “Sometimes, the only thing you have is your own belief in yourself.”

As a president, this tough hide gives him strength, especially if he has to make a difficult or unpopular decision. “If I don’t trust myself, I’m done. If you don’t know yourself, you may find yourself on the wrong side of what you believe in a heartbeat. In the field, I learned that every day.”