A Page in Time: A Look Back at Expression Magazine

May 1, 2016 | Footprints Magazine, Humanities and Society, School of Fine Arts and Humanities 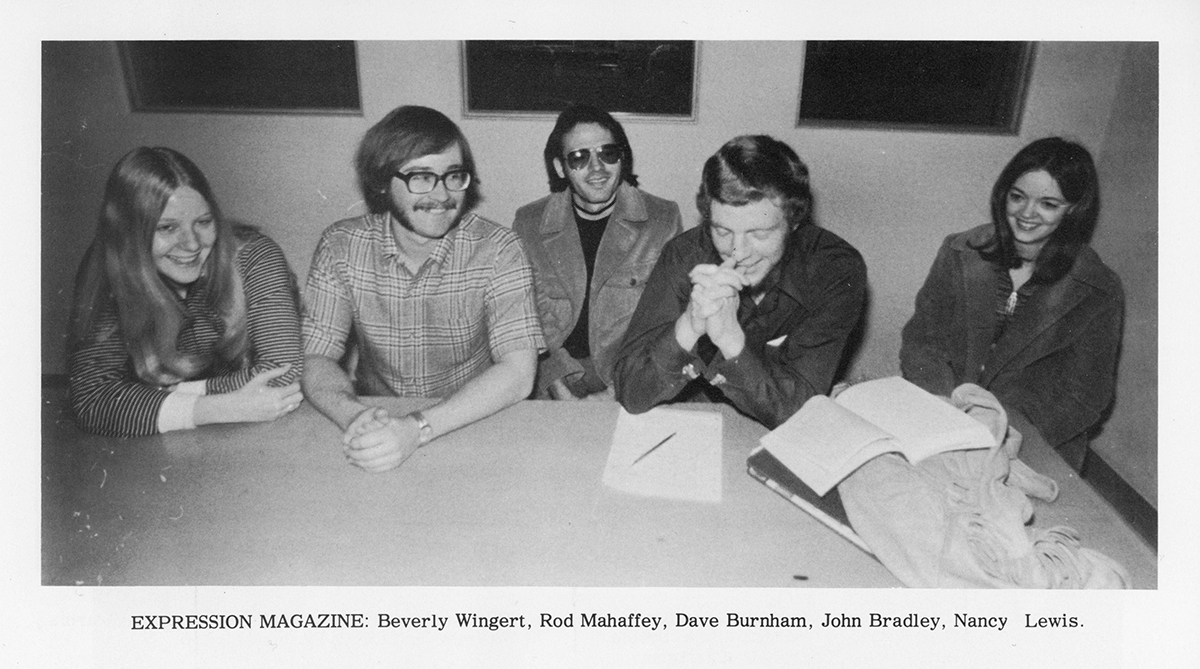 In the spring of 1967 Bertha Davidson, instructor of English, started the Expression magazine, according to Bill Curry, my new boss and department chairman of the Language and Literature Division at Casper College. “Bert Davidson knew some of her students were outstanding writers, and she wanted their works to receive campus attention,” Mr. Curry told me as I placed my new red grade book into the top drawer of an old wooden desk in the lowest floor of the Administration Building (Liesinger Hall).

I was sharing Mr. Curry’s office because no other space was available. I was a replacement instructor for Bertha Davidson in the spring semester of 1967. She was terminally ill with cancer and died soon after I came on campus. I was hired because I was conveniently on hand, newly married to Bob Jacob, accounting instructor at Casper College. When (college president) Dr. Aley and Dick Reitz, English instructor, told me the job was mine if I wanted it, I agreed but asked if one of my assigned classes could be moved so that I could go home and cook lunch for my husband. As a bride of the middle 1960s, I considered my husband’s comfort more important than my academic career. Apparently Dr. Aley and Dick Reitz understood because they agreed to the change.

For several years Bertha Davidson had produced typed copies of poetry and short stories written by her students. Mr. Curry showed me carbon copies of two Expressions, which Ms. Davidson had edited. When Ms. Davidson became ill, Mr. Curry arranged for Charlene Nightwine, English instructor, to become the faculty sponsor, so Charlene was working with a student staff to select the best of the submissions, which were then taken to a printing business downtown.

Unfortunately, the printed magazines of 1967 arrived on campus too late to be distributed via English classrooms to students. I recall at least one box full of magazines roosting in Mr. Curry’s office when the spring semester ended. Charlene was very distressed about the delay.

In the fall of 1967, the addition to the Administration Building was completed, so the faculty of the Casper College English and Foreign Language Departments were assigned offices and classrooms in the green-tiled addition. Unfortunately, the windows of our offices were so high that views of the rose garden were blocked.

Mrs. Nightwine’s husband was offered a job overseas – a government position, I believe – so Charlene resigned from the faculty to follow her husband to Thailand. Mr. Curry asked me to become the faculty sponsor of Expression magazine, but I countered by saying that I would accept this extra duty if Jolayne Hinkle would be the co-sponsor. Luckily for me, Jolayne agreed. Jolayne and I recognized the challenges we faced:

We solved one of our problems by talking with Margaret Demorest, English Instructor, who taught “Advanced Freshman English” and “English Literature and Twentieth Century Humanities.” Margaret agreed to encourage her students to submit their poems and short stories to Expression but she cautioned us that we should not suggest any corrections or revisions of the students’ work, maintaining that was her job as their classroom teacher. Jolayne and I did not hesitate to agree to this stipulation. We had too many papers of our own students to look for any more. Mrs. Peggy Curry, who taught creative writing in the evenings, agreed to recommend Expression magazine to her students, as did all of the other English and language instructors.

In the new addition were several windowless closets for custodians to use. One was extra-large, so Jolayne and I went to Dr. Lloyd Loftin, dean of faculty, to ask permission to use the room for a desk and typewriter and supplies. Dr. Loftin was always a gentleman where ladies were concerned. When we encountered him in the hallway, he listened politely to our request, but clearly he did not want to say yes and he did not have a good reason to tell us no. He suddenly excused himself saying he must go and would let us know later. He escaped us, the dear man. Later Dr. Loftin gave us keys to the little room and we equipped it with cast-off chairs and desk.

We were wary of contracting with a local printer based on Charlene Nightwine’s experience the previous year, so we decided to type the entire magazine ourselves and then send it to an out-of-state printer, a business that had printed the NCHS literary magazine the previous year. I contacted the director of a local IBM store in Casper who agreed to the loan of a Selectric IBM typewriter for our project. These were the days before computers. IBM had developed a computer, which was able to justify the right margins of typed pages. At that time, the only Selectric typewriter on campus was the one Dr. Aley’s secretary used. Jolayne and I figured that with volunteer help we could type submissions as they were approved and we could lay out the copy ourselves. A wonderful business student, Mrs. Lily Beavers, volunteered and completed most of the typing.

Jolayne thought that Expression should showcase the work of student artists as well as writers – good idea, but I made an awful mistake in implementing it. I asked the art instructors for copies of student work and then Jolayne and I selected the ones we thought were the best. We should, of course, have asked the art instructors to make the decisions. Then to compound the mistake, we listed Jim Gaither and another art instructor – perhaps Mr. Ossa – as art editors.

The 1968 Expression magazine saw the light of day on campus only briefly, so the art instructors were embarrassed only briefly. Dr. Loftin looked at the centerfold art section and spotted a drawing of a nude female. “This is close to pornography,” he told me. But we did not dispose of the 1968 Expression because of his reaction nor did he ask us to do so. We found out after publication that a student had plagiarized a short story from a slick-paper magazine. We stopped our distribution efforts and sent the copies to the trash.

We did better in the next years. The 1969, 1970 and 1971 Expressions published no plagiarized work and we handled the art submissions more appropriately. We had bright and hard-working students for the Expression staff. Rod Mahaffey (AA, ’71) was a student editor. Mary Woodall (’69) and Mike Leberer (AA, ’69) were dedicated student staff members. I wish I could remember more names, but the archived editions of Expression at the Goodstein Foundation Library would have a full list of student workers.

I asked Mike Leberer to design a certificate to give to people who deserved special recognition. Using a linoleum-print process, Mike used symbols associated with human creativity: a vase with the word “Expression” written in elegant letters; a trumpet, a boat reminiscent of Ulysses’ voyages; seeds inside a fruit. Clever design, but unfortunately, Mike arranged the symbols to suggest a macabre human skull. I have the original certificate, which I will donate if someone at Casper College wants it.

Mike was not the only student to play tricks.  Another student, wrote a lovely poem about merry-go-round horses. After Expression published it, Jolayne and I learned that the poem made references to using illicit drugs. These were the years when the war in Vietnam and recreational drug use were big issues on America’s campuses.

After the 1968 issue, we contracted with local printing businesses to print Expression and we were satisfied. Also, in 1968, Jolayne Hinkle and the student editor successfully requested funding from the Casper College student government, so Expression was on better financial footing.

As if we didn’t already have enough to do, I urged Jolayne and the student staff to initiate an Expression lecture series for discussion about the power of language with voices heard from students, faculty and community members. The lectures were well received for the two or three years we sponsored them.

In the fall of 1971 Jolayne Hinkle left Casper College to teach at a community college in Amherst, Massachusetts. I resigned from my position at Casper College when my husband and I adopted a baby boy, Ryan Robert Jacob. I continued to teach night classes in composition for the next three years. I returned in 1975-76 to teach three daytime classes, and then I was offered a full-time position in 1986. I was a classroom instructor until 1992 when I became Casper College’s first grants coordinator.

After Jolayne Hinkle and me, the next faculty sponsor was Diane Collins. Other faculty sponsors were Ellen Burke and Terry Rasmussen, both English instructors. A complete list of faculty sponsors can be found in the archived Expression magazines at the library. Each faculty sponsor and student staff added quality and quantity to Casper College’s Expression literary magazine. I hope Bert Davidson knows from her perch in heaven that her little magazine continues today full steam.

Shirley Jacob was employed by Casper College for 25 years, retiring in 2003, after serving as an English instructor and as the grants coordinator. She will be honored in May 2016 as the alumni association’s Commitment to Excellence recipient at the 2016 commencement ceremonies.