President Nolte to Retire: A Look at the Impact of CC’s Fifth President 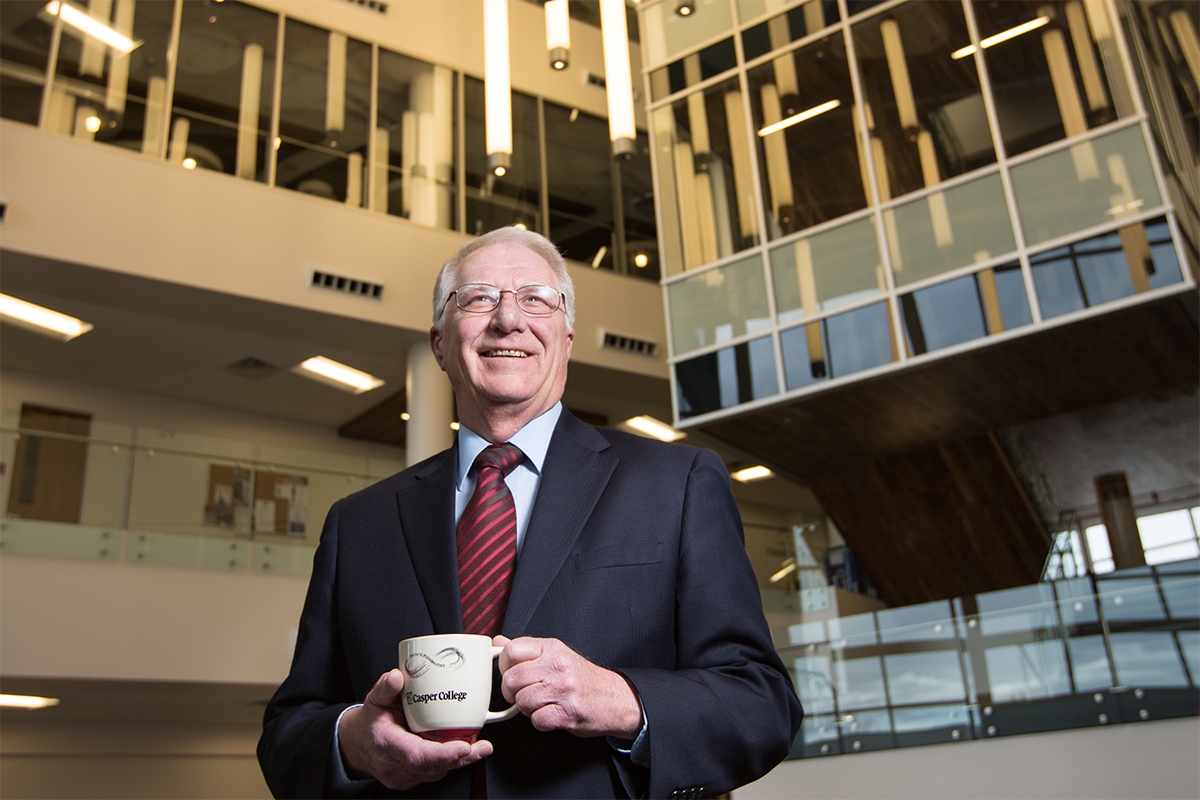 President Walter Nolte, the fifth person to carry that title at Casper College, will retire June 30, leaving a legacy of growth and change at Wyoming’s oldest community college.

President Nolte announced his plans to faculty and staff at an August all-campus meeting marking the start of the academic year. He plans to serve through June 30, 2015, after serving exactly 11 years as president.

“This is my 38th year as a college administrator. I’m going to be 67 later this year, and will have been president two years longer than I ever thought I would,” he says. “Life transitions are never particularly easy, but Becky and I are looking forward to having more time to spend with our family.

The Noltes plan to split their time between a home they currently own in Missoula, Montana, where their daughter Nicole and her family lives, and a condo they are purchasing in Fort Collins, Colo., where their son and his family lives.

Although he has been a college administrator in several states, he’s sure he will miss none more than Casper. “My 11 years in Casper will be the longest I’ve ever been in one place,” he says. “There are so many people that make this place so special. I’m just glad the route between our two homes will go right through Casper. I’ll be visiting often.”

He also says he may work on some short-term, professional projects, such as assisting community colleges through presidential transitions, serving as a consultant on community college issues, or doing some teaching. He may continue his popular noncredit lectures on the historical context of the television series Downton Abbey. This summer he is leading a Casper College continuing education trip to England, which will include a visit to Highclere Castle, the setting for the series.

He’s quick to point out that the enhancements at Casper College over the past 11 years were possible only because of the shared governance culture of the college. “My job has been to provide constant encouragement of people in the college community to make sure that everything we do helps us fulfill our mission.”

When asked about the most satisfying parts of his presidency, he points to the 10 commencement exercises he has led, and the last one he’ll lead this May. “Without a doubt, commencement day is my favorite of the year. It brings closure to all the efforts of the faculty, staff and other administrators at the college and celebrates our students’ success. It’s why we’re all here.”

Despite the dramatic physical changes on campus, Nolte has always been quick to point out that those changes are only as valuable as the educational quality they support.

Dr. Nolte points to the Gateway Building as an example of form following function. “Consolidating student services in the Gateway Building was not just about having new desks or a rearranged space. It was about reducing barriers for students. Having to visit one counter instead of three makes a big difference to a young mother with small children registering for classes that will allow her to begin a new career, or for the family that just drove three hours to enroll the first person in their family to ever attend college.”

Numerous other academic initiatives were launched under his leadership. The Center for Learning through Service has enabled Casper College to build the highest rate of civic engagement of any Wyoming college, with more than 750 students participating in service learning opportunities. The college’s first honors program was developed to attract more high-achieving students. An international education program led to partnerships with several foreign institutions. He also oversaw the creation of the college’s Learning Communities program, which pairs groups of students with collections of courses from various disciplines.

These and other enhancements contributed to Casper College’s placing in the top 15 percent of U.S. community colleges for student-faculty interaction, portion of area residents enrolled, and college completion rates for students.

Dr. Nolte also guided a reorganization of the academic structure of campus, leading to the current structure of five separate schools within the college, and a consolidation of noncredit programs into a single college division. Since the reorganization, the college broke credit and noncredit enrollment records, highlighted by a record high 927 degrees and certificates being awarded in the spring 2014 semester.

Shortly after President Nolte arrived on campus, he led efforts to develop a culture of continuous strategic planning. As part of that process, the college’s first master plan for facilities was developed with input from campus and community.

In order to fund much of the master plan, Dr. Nolte led efforts to secure voter support for a $35 million bond issue on the 2008 ballot. Local voters approved the measure by a wide margin, even amidst the start of a national economic downturn.

The bond issue, combined with strong support from the Casper College Foundation and the State of Wyoming, has enabled more than $100 million in improvements to the campus in recent years. Most visible are five new buildings, The Gateway Building: Residence Hall, Early Childhood Learning Center, Music Building, Casper College Student Union and University of Wyoming at Casper. Other portions of the master plan that were completed include the purchase of a ranch west of Casper to provide a permanent home for agriculture and rodeo activities, the use of a former city fire station for fire science training, and the completion of the Sharon D. Nichols Auditorium, in partnership with the Wyoming Trucking Association.

Soon after his arrival, he developed the College Council, which brings together representatives of each of the college’s governance bodies to review all major strategic decisions made on campus. He later began the Casper College Leadership Institute, an internal employee development program to help provide a continuous flow of capable new leaders throughout campus.

Strong ties with the community have been a consistent theme at Casper College. Bill McDowell, chair of the Natrona County Commissioners, recently wrote, “Walt Nolte came to Casper and quickly realized the opportunity to expand the educational services to the community. Following successful previous executives he coalesced the community and expanded the role of Casper College significantly. The community was rewarded with an increased ability to garner both additional associate degree programs and bachelor’s and master’s degree programs through the still evolving relationship with the University of Wyoming.“

Dr. Nolte has been active in legislative relations at the state level as well. He has helped secure increased funding for community colleges, as well as several changes to state statutes that enable the colleges to operate more efficiently. Former Wyoming Governor Dave Freudenthal recently lauded Dr. Nolte, writing, “I turned to President Nolte when I wanted the unfettered truth about post-secondary education issues. Our numerous and candid conversations, his commitment to the college he leads, and my observations of his leadership and management style all support my decision to offer my highest endorsement on his behalf.”

Dr. Nolte has been similarly recognized at the regional and national level. The National Council for Marketing and Public Relations District #4 named him their 2011 Pacesetter of the Year. He was also named a distinguished graduate of the University of Texas at Austin College of Education, and in 2011 was named one of the first recipients of the Tacoma County Community College Distinguished Alumnus Award. John E. Roueche, Ph.D., arguably the foremost scholar on community college leadership, recently wrote, “Dr. Nolte is one of those rare leaders who practices well what he preaches, leading by his own excellent example. He is also a leader who is quite comfortable in his own skin and delights in the success of all on his team. He truly understands that the community college is of, by and for the community.”

This story originally appeared in the Winter 2015 issue of Footprints.